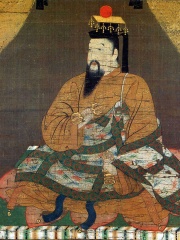 Emperor Go-Daigo (後醍醐天皇 Go-Daigo-tennō) (26 November 1288 – 19 September 1339) was the 96th emperor of Japan, according to the traditional order of succession. He successfully overthrew the Kamakura shogunate in 1333 and established the short lived Kenmu Restoration to bring the Imperial House back into power. This was to be the last time the emperor had real power until the Meiji Restoration in 1868. Read more on Wikipedia

Emperor Go-Daigo is most famous for his attempt to overthrow the Kamakura shogunate in 1333. His efforts were unsuccessful and he was forced to abdicate.

Among people born in 1288, Emperor Go-Daigo ranks 4. Before him are Orhan, Charles I of Hungary, and Ivan I of Moscow. After him are Emperor Go-Fushimi, Gersonides, and Mahmoud Shabestari. Among people deceased in 1339, Emperor Go-Daigo ranks 1. After him are Otto, Duke of Austria, Aleksandr Mikhailovich of Tver, Henry XIV, Duke of Bavaria, Aldona of Lithuania, Jadwiga of Kalisz, Chungsuk of Goryeo, Azzone Visconti, and Francesco Dandolo.