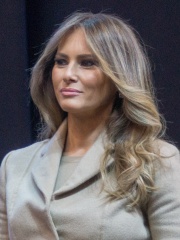 Melania Trump ( mə-LAH-nee-ə; born Melanija Knavs [mɛˈlaːnija ˈknaːws], Germanized as Melania Knauss [meˈlaːni̯a ˈknaʊs]; April 26, 1970) is a Slovene-American former model and businesswoman who served as the first lady of the United States from 2017 to 2021, as the wife of President Donald Trump. Trump grew up in Slovenia (then part of Yugoslavia) and worked as a fashion model through agencies in the European fashion capitals of Milan and Paris before moving to New York City in 1996. She was associated with Irene Marie Models and Trump Model Management. Read more on Wikipedia

Melania Trump is most famous for being the wife of the 45th President of the United States, Donald Trump. She is also well known for her modeling and jewelry lines.

Among companions, Melania Trump ranks 203 out of 687. Before her are Maria Theresa of Austria, Joan the Lame, Matilda of Flanders, Elisabeth Förster-Nietzsche, Julia, and Shahnaz Pahlavi. After her are Louisa Ulrika of Prussia, Sophia Magdalena of Denmark, Cecilia Bowes-Lyon, Countess of Strathmore and Kinghorne, Maria Anna of Austria, Philippa of Lancaster, and Michelle Obama.

Among COMPANIONS In Slovenia