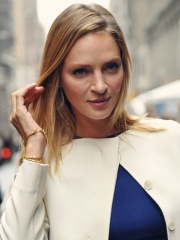 Uma Karuna Thurman (born April 29, 1970) is an American actress, producer and fashion model. Prolific in film and television productions encompassing a variety of genres, she had her breakthrough in Dangerous Liaisons (1988), following appearances on the December 1985 and May 1986 covers of British Vogue. Thurman rose to international prominence with her role as Mia Wallace in Quentin Tarantino's Pulp Fiction (1994), for which she was nominated for the Academy Award, the BAFTA Award, and the Golden Globe Award for Best Supporting Actress. Read more on Wikipedia

Uma Thurman is most famous for her role as Mia Wallace in the 1994 film Pulp Fiction.