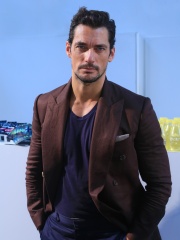 David James Gandy (born February 19, 1980) is a British male fashion model who began his career after winning a televised model-search competition. For several years, Gandy was the lead male model for Italian designers Dolce & Gabbana who featured him in their advertising campaigns and fashion shows. In an industry dominated by skinny models, Gandy's muscular build caused some menswear fashion designers to change standards. Read more on Wikipedia

Since 2007, the English Wikipedia page of David Gandy has received more than 1,747,726 page views. His biography is available in 21 different languages on Wikipedia making him the 114th most popular model.

Among MODELS In United Kingdom