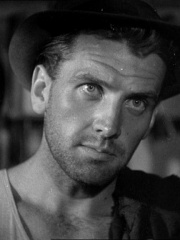 Massimo Girotti (18 May 1918 – 5 January 2003) was an Italian film actor whose career spanned seven decades.Born in Mogliano, in the province of Macerata, Girotti developed his athletic physique by swimming and playing polo. While studying engineering, he attracted the attention of Mario Soldati, who offered him a small part in the film Dora Nelson (1939), but it was not until later, in Alessandro Blasetti's La corona di ferro (The Iron Crown) (1941) and Roberto Rossellini's Un Pilota ritorna (A Pilot Returns) (1942), that he began to make an impression as a serious actor. In 1943 came a turning point in his career when Luchino Visconti cast him opposite the torrid Clara Calamai in Ossessione (Obsession), an earlier adaptation of the same novel on which Hollywood's The Postman Always Rings Twice is based. Read more on Wikipedia