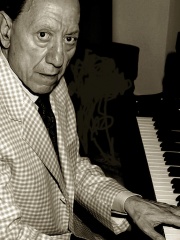 Renato Carosone ([reˈnaːto karoˈzoːne]; born Renato Carusone; January 3, 1920 – May 20, 2001) was an Italian musician. He was a prominent figure of the Italian music scene in the second half of the 20th century. He was also a modern performer of the so-called canzone napoletana, Naples' song tradition. Read more on Wikipedia

Since 2007, the English Wikipedia page of Renato Carosone has received more than 128,626 page views. Her biography is available in 15 different languages on Wikipedia making her the 352nd most popular singer.