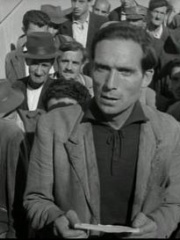 Lamberto Maggiorani (28 August 1909 – 22 April 1983) was an Italian actor remembered for his portrayal of Antonio Ricci in the 1948 Vittorio De Sica film Bicycle Thieves.He was a factory worker (he worked as a turner) and non-professional actor at the time he was cast in this film. He earned 600,000 lire ($1,000 US) for his performance, enabling him to buy new furniture and treat his family to a vacation; but when he returned to the factory he was laid off because business was slackening and management felt it would be fairer to terminate him instead of other impoverished co-workers since he was perceived to have "made millions" as a movie star. He found occasional work as a bricklayer, but continued to try to get roles in movies, with little success; even de Sica was reluctant to employ him as anything other than an extra. Read more on Wikipedia