This page contains a list of the greatest Italian Actors. The pantheon dataset contains 9,996 Actors, 220 of which were born in Italy. This makes Italy the birth place of the 9th most number of Actors behind Japan and Germany.

The following people are considered by Pantheon to be the top 10 most legendary Italian Actors of all time. This list of famous Italian Actors is sorted by HPI (Historical Popularity Index), a metric that aggregates information on a biography’s online popularity. Visit the rankings page to view the entire list of Italian Actors. 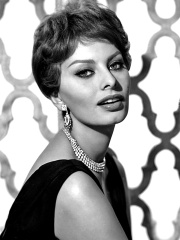 With an HPI of 79.38, Sophia Loren is the most famous Italian Actor.  Her biography has been translated into 98 different languages on wikipedia.

Sofia Costanza Brigida Villani Scicolone (Italian: [soˈfiːa vilˈlaːni ʃʃikoˈloːne]; born 20 September 1934), known professionally as Sophia Loren ( lə-REN, Italian: [ˈlɔːren]), is an Italian actress. She was named by the American Film Institute as one of the greatest stars of Classical Hollywood cinema. As of 2023, she is one of the last surviving major stars from the Golden Age of Hollywood cinema and is the only remaining living person to appear on AFI's list of the 50 greatest stars of American film history, positioned at number 21. Encouraged to enroll in acting lessons after entering a beauty pageant, Loren began her film career at age sixteen in 1950. She appeared in several bit parts and minor roles in the early part of the decade, until her five-picture contract with Paramount in 1956 launched her international career. Her film appearances around this time include The Pride and the Passion, Houseboat, and It Started in Naples. During the 1950s, she starred in films as a sexually emancipated persona and was one of the best known sex symbols of the time. Loren's performance as Cesira in the film Two Women (1961) directed by Vittorio De Sica won her the Academy Award for Best Actress, making her the first actor to win an Oscar for a non-English-language performance. She holds the record for having earned seven David di Donatello Awards for Best Actress: Two Women; Yesterday, Today and Tomorrow (1963); Marriage Italian Style (1964, for which she was nominated for a second Oscar); Sunflower (1970); The Voyage (1974); A Special Day (1977) and The Life Ahead (2020). She has won five special Golden Globes (including the Cecil B. DeMille Award), a BAFTA Award, a Laurel Award, a Grammy Award, the Volpi Cup for Best Actress at the Venice Film Festival and the Best Actress Award at the Cannes Film Festival. In 1991, she received the Academy Honorary Award for lifetime achievements. At the start of the 1980s, Loren chose to make rarer film appearances. Since then, she has appeared in films such as Prêt-à-porter (1994), Grumpier Old Men (1995), Nine (2009), and The Life Ahead (2020). 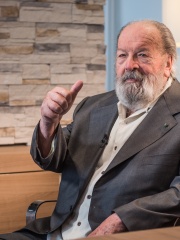 With an HPI of 77.79, Bud Spencer is the 2nd most famous Italian Actor.  His biography has been translated into 66 different languages.

Carlo Pedersoli (31 October 1929 – 27 June 2016), known professionally as Bud Spencer, was an Italian actor, professional swimmer and water polo player. He was known for action-comedy and Spaghetti Western roles with his long-time film partner and friend Terence Hill. The duo "garnered world acclaim and attracted millions to theater seats". Spencer and Hill appeared in 18 films together. In his youth, Bud Spencer was a successful athlete and swimmer for the Gruppo Sportivo Fiamme Oro. He obtained a law degree and registered several patents. Spencer also became a certified commercial airline and helicopter pilot, and supported and funded many children's charities, including the Spencer Scholarship Fund. 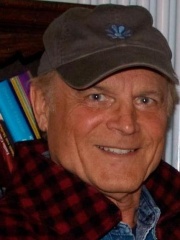 With an HPI of 77.17, Terence Hill is the 3rd most famous Italian Actor.  His biography has been translated into 56 different languages.

Terence Hill (born Mario Girotti; 29 March 1939) is an Italian actor, film director, screenwriter and producer. He began his career as a child actor and gained international fame for starring roles in action and comedy films, many with longtime film partner and friend Bud Spencer. During the height of his popularity Hill was among Italy's highest-paid actors.His most widely seen films include comic and standard Spaghetti Westerns, some based on popular novels by German author Karl May about the Wild West. Of these, the most famous are Lo chiamavano Trinità (They Call Me Trinity, 1970); …continuavano a chiamarlo Trinità (Trinity Is Still My Name, 1971), the highest grossing Italian film to date; and Il mio nome è Nessuno (My Name Is Nobody, 1973), co-starring Henry Fonda. Hill, whose stage name was the product of a publicity stunt by film producers, also went on to a successful television career in Italy, playing the title character in the long-running Rai 1 series Don Matteo since 2000. 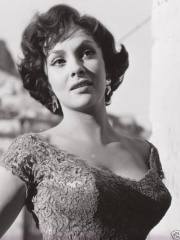 With an HPI of 75.16, Gina Lollobrigida is the 4th most famous Italian Actor.  Her biography has been translated into 66 different languages.

Luigia "Gina" Lollobrigida OMRI (4 July 1927 – 16 January 2023) was an Italian actress, photojournalist, and politician. She was one of the highest-profile European actresses of the 1950s and early 1960s, a period in which she was an international sex symbol. At the time of her death, she was among the last high-profile international actors from the Golden Age of Hollywood cinema. As her film career slowed, Lollobrigida established a second career as a photojournalist. In the 1970s she achieved a scoop by gaining access to Fidel Castro for an exclusive interview. Lollobrigida continued as an active supporter of Italian and Italian-American causes, particularly the National Italian American Foundation (NIAF). In 2008 she received the NIAF Lifetime Achievement Award at the Foundation's Anniversary Gala. In 2013, she sold her jewellery collection and donated the nearly US$5 million from the sale to benefit stem-cell therapy research. She won the Henrietta Award at the 18th Golden Globe Awards. 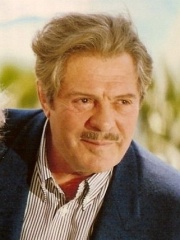 With an HPI of 75.16, Marcello Mastroianni is the 5th most famous Italian Actor.  His biography has been translated into 78 different languages.

Marcello Vincenzo Domenico Mastroianni (28 September 1924 – 19 December 1996) was an Italian film actor, regarded as one of his country's most iconic male performers of the 20th century. He played leading roles for many of Italy's top directors in a career spanning 147 films between 1939 and 1997, and garnered many international honors including 2 BAFTA Awards, 2 Best Actor awards at the Venice and Cannes film festivals, 2 Golden Globes, and 3 Academy Award nominations. Born in the province of Frosinone and raised in Turin and Rome, Mastroianni made his film debut in 1939 at the age of 14, but did not seriously pursue acting until the 1950s, when he made his critical and commercial breakthrough in the caper comedy Big Deal on Madonna Street (1959). He became an international celebrity through his collaborations with director Federico Fellini, first as a disillusioned tabloid columnist in La Dolce Vita (1960), then as a creatively-stifled filmmaker in 8½ (1963). Excelling in both dramatic and comedic roles, he formed a notable on-screen duo with actress and sex symbol Sophia Loren, co-starring with her in eight films between 1954 and 1994. Despite international acclaim, Mastroianni largely shunned Hollywood, and remained a quintessentially Italian thespian for the majority of his career. Nonetheless, he was the first actor to receive an Academy Award nomination for a non-English language performance, and was nominated for Best Actor three times – Divorce Italian Style (1961), A Special Day (1977), and Dark Eyes (1987). He was one of only three actors, the others being Jack Lemmon and Dean Stockwell, to win the prestigious Cannes Film Festival Award for Best Actor twice. Mastroianni's contributions to Italian art and culture saw him receive multiple civil honours, including the Order of Merit of the Italian Republic, the highest ranking knighthood of the country. 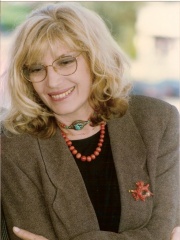 With an HPI of 71.60, Monica Vitti is the 6th most famous Italian Actor.  Her biography has been translated into 53 different languages. 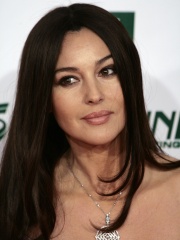 With an HPI of 71.24, Monica Bellucci is the 7th most famous Italian Actor.  Her biography has been translated into 83 different languages.

Monica Anna Maria Bellucci (Italian: [ˈmɔːnika belˈluttʃi]; born 30 September 1964) is an Italian actress and model. She began her career as a fashion model, modelling for Dolce & Gabbana and Dior, before making a transition to Italian films and later American and French films. She made her film debut in Francesco Laudadio's Italian comedy La Riffa (1991). The following year she played a Bride of Dracula in Francis Ford Coppola's gothic horror romance film Bram Stoker's Dracula (1992). For her leading role in L'Appartement (1997), she received a César Award for Most Promising Actress. She played Malèna Scordia in the Giuseppe Tornatore's acclaimed Italian romantic drama Malèna (2000). She starred in Gaspar Noé's controversial arthouse psychological thriller film Irréversible (2002), which premiered at the Cannes Film Festival. In 2004, she portrayed Mary Magdalene in Mel Gibson's biblical drama The Passion of the Christ (2004). She portrayed Persephone in the 2003 science-fiction films The Matrix Reloaded and The Matrix Revolutions. At the age of 51, by appearing in the 2015 James Bond film Spectre, she became the oldest Bond girl in the history of the franchise. She has since acted in films such as The Whistleblower (2010), The Wonders (2014), On the Milky Road (2016), The Best Years of a Life (2019), The Man Who Sold His Skin (2020), and Memory (2022). 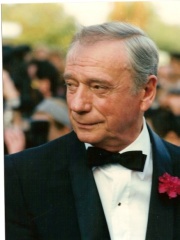 With an HPI of 70.35, Yves Montand is the 8th most famous Italian Actor.  His biography has been translated into 59 different languages. 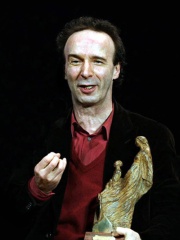 With an HPI of 69.29, Roberto Benigni is the 9th most famous Italian Actor.  His biography has been translated into 72 different languages.

Roberto Remigio Benigni (Italian pronunciation: [roˈbɛrto beˈniɲɲi]; born 27 October 1952) is an Italian actor, comedian, screenwriter and director. He gained international recognition for writing, directing and starring in the Holocaust comedy-drama film Life Is Beautiful (1997), for which he received the Academy Awards for Best Actor and Best International Feature Film. The acting win along with Sophia Loren for Two Women are the only two non-English speaking roles to win Academy Awards. Benigni made his acting debut in 1977's Berlinguer, I Love You, which he also wrote, and which was directed by Giuseppe Bertolucci. Benigni's directorial debut was the 1983 anthology film Tu mi turbi, which was also the acting debut of his wife, Nicoletta Braschi. He continued directing and also starring in the comedic films Nothing Left to Do But Cry (1984), The Little Devil (1988), Johnny Stecchino (1991), The Monster (1994), Pinocchio (2002), and The Tiger and the Snow (2005). Benigni acted in the Jim Jarmusch films Down by Law, Night on Earth (1991) and Coffee and Cigarettes (2003). He also acted in Blake Edwards' Son of the Pink Panther (1993), Woody Allen's To Rome with Love (2012), and Matteo Garrone's Pinocchio (2019). 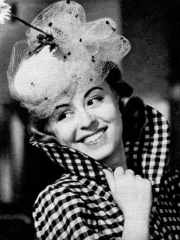 With an HPI of 69.21, Giulietta Masina is the 10th most famous Italian Actor.  Her biography has been translated into 44 different languages.

Giulia Anna "Giulietta" Masina (22 February 1921 – 23 March 1994) was an Italian film actress best known for her performances as Gelsomina in La Strada (1954) and Cabiria in Nights of Cabiria (1957), for which she won the Cannes Film Festival Award for Best Actress at the 1957 Cannes Film Festival. Cinema historian Peter Bondanella described Masina's work as "masterful" and "unforgettable," and Charlie Chaplin, with whose work Masina's is often compared, called her "the actress who moved him most." Both La Strada and Nights of Cabiria won Academy Awards for Best Foreign Language Film and were described as having been "inspired" by Masina's "humanity."

Pantheon has 220 people classified as actors born between 1496 and 1992. Of these 220, 131 (59.55%) of them are still alive today. The most famous living actors include Sophia Loren, Terence Hill, and Gina Lollobrigida. The most famous deceased actors include Bud Spencer, Marcello Mastroianni, and Monica Vitti. As of April 2022, 44 new actors have been added to Pantheon including Nino Castelnuovo, Anthony Steffen, and Gigi Proietti.