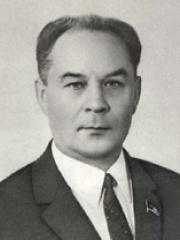 Alexander Nikolayevich Shelepin (Russian: Алекса́ндр Никола́евич Шеле́пин; 18 August 1918 – 24 October 1994) was a Soviet politician and security and intelligence officer. A long-time member of the Central Committee of the Communist Party of the Soviet Union, he served as First Deputy Prime Minister, as a full member of the Politburo and as the Chairman of the KGB from December 1958 to November 1961. He continued to maintain decisive influence in the KGB until 1967; his successor as KGB Chairman, Vladimir Semichastny, was his client and protégé.Intelligent, ambitious and well-educated, Shelepin was the leader of a hard-line faction within the Communist Party that played a decisive role in overthrowing Nikita Khrushchev in 1964. Read more on Wikipedia

Since 2007, the English Wikipedia page of Alexander Shelepin has received more than 85,389 page views. His biography is available in 18 different languages on Wikipedia making him the 8,302nd most popular politician.

Among politicians, Alexander Shelepin ranks 8,258 out of 14,801. Before him are Duchess Amelia of Württemberg, Jean-Yves Le Drian, Theresa of Portugal, Countess of Flanders, Azarmidokht, Michail Stasinopoulos, and Prince Philipp of Saxe-Coburg and Gotha. After him are Herman II, Duke of Swabia, John Turner, Charan Singh, Ariadne, Berthold V, Duke of Zähringen, and Vasily of Kostroma.