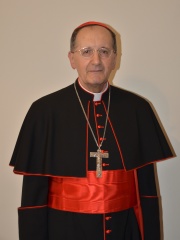 Beniamino Stella (born 18 August 1941) is an Italian prelate of the Catholic Church who was Prefect of the Congregation for the Clergy from 2013 to 2021; he has been a cardinal since 2014. He began working in the diplomatic service of the Holy See in 1970, was made an archbishop in 1987, and served as a nuncio in several countries between 1987 to 2007. Read more on Wikipedia

Among religious figures, Beniamino Stella ranks 1,200 out of 2,272. Before him are Madalyn Murray O'Hair, Germanus of Auxerre, Guru Angad, Carpocrates, Victor Maurus, and Alexander Schmorell. After him are Jeremias II of Constantinople, Antipope Theodoric, Kevin Farrell, Pietro Gasparri, Shinran, and Alfred Loisy.