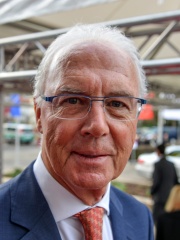 Franz Anton Beckenbauer (German pronunciation: [ˈfʁants ˈbɛkŋ̍ˌbaʊɐ], audio ; born 11 September 1945) is a German former professional footballer and manager. In his playing career he was nicknamed Der Kaiser ("The Emperor") because of his elegant style, dominance and leadership on the field, and also as his first name "Franz" is reminiscent of the Austrian emperors. He is widely regarded to be one of the greatest players in the history of the sport. Read more on Wikipedia

Franz Beckenbauer is most famous for being a German footballer who played as a sweeper. He is also the only person to win the World Cup as captain and coach.