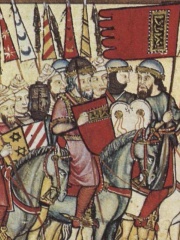 Muhammad I of Granada

Abu Abdullah Muhammad ibn Yusuf ibn Nasr (Arabic: أبو عبد الله محمد بن يوسف بن نصر‎) (1195 – 22 January 1273), also known as Ibn al-Aḥmar (Arabic: ابن الأحمر‎) and by his honorific al-Ghalib billah ("The Victor by the Grace of God"), was the first ruler of the Emirate of Granada, the last independent Muslim state on the Iberian Peninsula, and the founder of its ruling Nasrid dynasty. He lived during a time when Iberia's Christian kingdoms—especially Portugal, Castile and Aragon—were expanding at the expense of the Islamic territory in Iberia, called Al-Andalus. Muhammad ibn Yusuf took power in his native Arjona in 1232 when he rebelled against the de facto leader of Al-Andalus, Ibn Hud. Read more on Wikipedia

Muhammad I of Granada is most famous for being the last Muslim ruler of the Emirate of Granada. He was also known for his military campaigns against Christians and Jews in Spain.

Page views of Muhammad I of Granadas by language

Among politicians, Muhammad I of Granada ranks 4,234 out of 15,710. Before him are Gentius, George II Rákóczi, Johann Wilhelm, Elector Palatine, Itamar Franco, Roger Mortimer, 1st Earl of March, and Mōri Motonari. After him are Bronisław Komorowski, Quintus Aurelius Symmachus, Zhao Tuo, Fikret Abdić, Æthelbald, King of Wessex, and Gaafar Nimeiry.