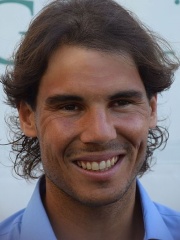 Rafael "Rafa" Nadal Parera (Catalan: [rəf(ə)ˈɛl nəˈðal pəˈɾeɾə], Spanish: [rafaˈel naˈðal paˈɾeɾa]; born 3 June 1986) is a Spanish professional tennis player currently ranked world No. 2 in men's singles tennis by the Association of Tennis Professionals (ATP). Nadal has won 20 Grand Slam singles titles, tied for the most in history for a male player with Roger Federer, as well as 35 ATP Tour Masters 1000 titles, 21 ATP Tour 500 titles and 2 Olympic gold medals (one each for singles and doubles in 2008 and 2016 respectively). Read more on Wikipedia

Since 2007, the English Wikipedia page of Rafael Nadal has received more than 23,942,961 page views. His biography is available in 104 different languages on Wikipedia making him the 10th most popular tennis player.

Among TENNIS PLAYERS In Spain