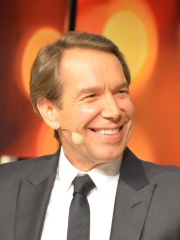 Jeffrey L. Koons (; born January 21, 1955) is an American artist recognized for his work dealing with popular culture and his sculptures depicting everyday objects, including balloon animals – produced in stainless steel with mirror-finish surfaces. He lives and works in both New York City and his hometown of York, Pennsylvania. His works have sold for substantial sums, including at least two record auction prices for a work by a living artist, including $91.1 million with fees in May 2019, for his Rabbit, purchased by Robert E. Mnuchin according to a New York Times article.On November 12, 2013, Koons' Balloon Dog (Orange) sold at Christie's Post-War and Contemporary Art Evening Sale in New York City for US$58.4 million, above its high US$55 million estimate, becoming the most expensive work by a living artist sold at auction. Read more on Wikipedia

Since 2007, the English Wikipedia page of Jeff Koons has received more than 1,819,707 page views. His biography is available in 35 different languages on Wikipedia making him the 28th most popular artist.

Among ARTISTS In United States