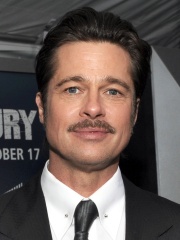 William Bradley Pitt (born December 18, 1963) is an American actor and film producer. He is the recipient of various accolades, including an Academy Award, a British Academy Film Award, two Golden Globe Awards, two Screen Actors Guild Award and a Primetime Emmy Award. In 2001, Pitt co-founded the production company, Plan B Entertainment which has produced various films including The Departed (2006), 12 Years a Slave (2013), and Moonlight (2016), which have all received the Academy Award for Best Picture. Read more on Wikipedia

Brad Pitt is most famous for his roles in movies such as Fight Club, Seven, and Troy.

TMZ
Angelina Jolie Behind FBI Lawsuit Against Brad Pitt, Brad Sources Call B.S.
Angelina Jolie may be trying to run Brad Pitt's name through the mud all over again, because the information she's trying to obtain through the FBI and a FOIA request is allegedly info to which she was already privy ... sources close to Brad tell TMZ.
TMZ Staff
digg.com
The FBI Outed Some New Details On How Brad Pitt Abused Angelina Jolie
Pitt was never charged in the incident, but Jolie's own request of FBI records have now made her disturbing allegations against him public.
@jaredrusso
TMZ
Brad Pitt Says He's Grateful Foundation Reached Settlement Over Katrina Homes
Brad Pitt stepped in to find a resolution with New Orleans homeowners who sued his Make It Right foundation over defective homes, telling us he's "grateful" a $20.5 million settlement was reached. Our sources tell us the "Bullet Train" star…
TMZ Staff
The Guardian
Brad Pitt foundation to pay $20.5m to owners of faulty post-Katrina houses
Lawsuit was brought by owners after Pitt’s supposedly sustainable, flood-proof homes were plagued by mold, leaks and rotIt sounded like a dream come true, complete with a handsome prince riding to the rescue: the construction of 109 new, sustainable, flood-pr…
Wilfred Chan