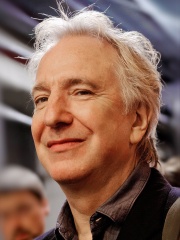 Alan Sidney Patrick Rickman (21 February 1946 – 14 January 2016) was an English actor and director. Known for his deep, languid voice, he trained at the Royal Academy of Dramatic Art in London and became a member of the Royal Shakespeare Company (RSC), performing in modern and classical theatre productions. Read more on Wikipedia

Alan Rickman is most famous for playing the role of Severus Snape in the Harry Potter films.

Celebitchy.com
Alan Rickman almost quit Harry Potter after the second movie
View this post on Instagram A post shared by Harry Potter Film (@harrypotterfilm) Madly, Deeply: The Diaries of Alan Rickman is coming out October 4 in the UK, October 18 in the US. The Guardian published some excerpts over the weekend and got everyone all a-…
Hecate
New York Post
Eddie Izzard: Alan Rickman told me a major ‘Harry Potter’ spoiler
The comedian said that the pair were having dinner when the late actor apparently spilled the beans.
Jack Hobbs
New York Post
Maggie Smith is just a ‘glorified extra,’ Alan Rickman once savagely wrote
The late actor's journals, which will be published in an upcoming book, revealed his thoughts about his fellow "Harry Potter" cast members.
Samantha Ibrahim
INSIDER
'Harry Potter' star Alan Rickman thought Emma Watson's diction was 'this side of Albania at times' in early films, according to personal diary
Excerpts from Alan Rickman's diary show that the late "Harry Potter" star criticized Emma Watson's performance as Hermione Granger in the films.
Eammon Jacobs