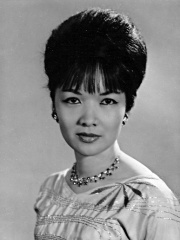 Trần Lệ Xuân (22 August 1924 – 24 April 2011), more popularly known in English as Madame Nhu, was the de facto First Lady of South Vietnam from 1955 to 1963. She was the wife of Ngô Đình Nhu, who was the brother and chief advisor to President Ngô Đình Diệm. As Diệm was a lifelong bachelor and because she and her family lived in Independence Palace together with him, she was considered to be the first lady. Known for her harsh and incendiary comments that denounced anti-government protests by some Buddhist sects and the strong U.S. Read more on Wikipedia

Among politicians, Madame Nhu ranks 4,578 out of 15,710. Before her are Julius Schaub, Georgios Papandreou, Lucius Antonius Saturninus, Aristobulus I, Stepan Shaumian, and Ben Carson. After her are Amyntas I of Macedon, Takahito, Prince Mikasa, Toomas Hendrik Ilves, Cyril Ramaphosa, Sviatoslav II of Kiev, and Aristides Pereira.