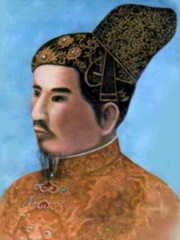 Gia Long (Vietnamese: [zaː lawŋ] (North), [jaː lawŋ] (South); 8 February 1762 – 3 February 1820), born Nguyễn Phúc Ánh (阮福暎) or Nguyễn Ánh, was the first Emperor of the Nguyễn dynasty of Vietnam. Unifying what is now modern Vietnam in 1802, he founded the Nguyễn dynasty, the last of the Vietnamese dynasties. A nephew of the last Nguyễn lord who ruled over south Vietnam, Nguyễn Ánh was forced into hiding in 1777 as a fifteen-year-old when his family was slain in the Tây Sơn revolt. Read more on Wikipedia

Since 2007, the English Wikipedia page of Gia Long has received more than 293,927 page views. His biography is available in 31 different languages on Wikipedia (up from 30 in 2019). Gia Long is the 3,645th most popular politician (down from 3,300th in 2019), the 17th most popular biography from Vietnam and the 11th most popular Vietnamese Politician.

Gia Long is most famous for being the first emperor of the Nguyen Dynasty.

Among politicians, Gia Long ranks 3,645 out of 15,710. Before him are Victoriano Huerta, Alexander III of Scotland, Emperor He of Han, Caranus of Macedon, Guy Verhofstadt, and Mokjong of Goryeo. After him are Frank B. Kellogg, Sviatopolk II of Kiev, Abbas III, Wim Kok, Emilio Aguinaldo, and Sancho VII of Navarre.