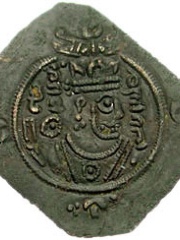 Shahrbaraz (also spelled Shahrvaraz or Shahrwaraz; New Persian: شهربراز), was shah (king) of the Sasanian Empire from 27 April 630 to 9 June 630. He usurped the throne from Ardashir III, and was killed by Iranian nobles after forty days. Before usurping the Sasanian throne he was a spahbed (general) under Khosrow II (590–628). Read more on Wikipedia

Shahrbaraz is most famous for his conquest of Egypt, which he accomplished in 663.

Page views of Shahrbarazs by language