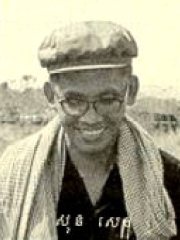 Son Sen (Khmer: សុន សេន pronounced [son seːn]; 12 June 1930 – 15 June 1997), alias Comrade Khieu (សមមិត្តខៀវ) or "Brother Number 89", was a Cambodian Communist politician and soldier. A member of the Central Committee of the Communist Party of Kampuchea/Party of Democratic Kampuchea, the Khmer Rouge, from 1974 to 1992, Sen oversaw the Party's security apparatus, including the Santebal secret police and the notorious security prison S-21 at Tuol Sleng. Son Sen was responsible for ordering the massacre of more than 100,000 in the Eastern Zone of Cambodia during the last six months of 1978.Sen was married to Yun Yat, who became the Party's minister of education and information. Read more on Wikipedia

Among politicians, Son Sen ranks 5,220 out of 15,577. Before him are Tukulti-Ninurta II, Josias, Hereditary Prince of Waldeck and Pyrmont, Donald III of Scotland, Geoffrey II, Duke of Brittany, Michel Debré, and Blanche of Anjou. After him are Sancha of León, Joscelin III, Count of Edessa, Giuseppe Saragat, Zelimkhan Yandarbiyev, Malik-Shah II, and Hans Aumeier.