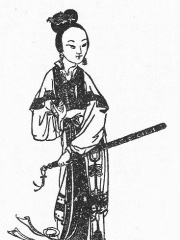 Lady Sun (fl.180s - 211), also known as Sun Ren in the 14th-century historical novel Romance of the Three Kingdoms and Sun Shangxiang in Chinese opera and contemporary culture, was a Chinese noblewoman who lived during the late Eastern Han dynasty. She was a daughter of the warlord Sun Jian and Lady Wu, and her older brothers were the warlords Sun Ce and Sun Quan, who founded the state of Eastern Wu in the Three Kingdoms period. Sometime in 209, she married the warlord Liu Bei to strengthen an alliance between Liu Bei and Sun Quan. Read more on Wikipedia

Lady Sun is most famous for being the goddess of the sun. She is also the daughter of Heaven and Earth.