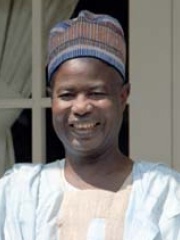 Ahmadou Babatoura Ahidjo (24 August 1924 – 30 November 1989) was a Cameroonian politician who was the first President of Cameroon, holding the office from 1960 until 1982. Ahidjo played a major role in Cameroon's independence from France as well as reuniting the French and English-speaking parts of the country. During Ahidjo's time in office, he established a centralized political system. Read more on Wikipedia

Among politicians, Ahmadou Ahidjo ranks 4,806 out of 15,710. Before him are Quintus Caecilius Metellus Numidicus, Dušan Simović, Tassilo III, Duke of Bavaria, Princess Augusta Wilhelmine of Hesse-Darmstadt, Stephen IV of Hungary, and Alain Poher. After him are Acamapichtli, José Sarney, Aistulf, Yaroslav II of Vladimir, García Ramírez of Navarre, and Omurtag of Bulgaria.

Among POLITICIANS In Cameroon