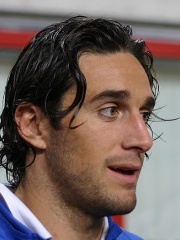 Luca Toni (Italian pronunciation: [ˈluːka ˈtɔːni]; born 26 May 1977) is an Italian former professional footballer who played as a striker. A prolific goalscorer, Toni scored over 300 goals throughout his career, and is one of the top-five highest scoring Italians in all competitions; with 322 career goals, he is currently the fourth-highest scoring Italian player of all time.Something of a footballing nomad, at club level, Toni played for twelve different Italian teams throughout his career. A late bloomer, he spent several seasons in the lower divisions of Italian football, as well as promising spells with minor Serie A clubs Vicenza and Brescia, before finally making his breakthrough with Palermo: he helped the team to Serie A promotion during the 2003–04 season by winning the Serie B title, and was the league's top scorer with 30 goals; the following season, he helped the club qualify for Europe, scoring 20 goals in Serie A. After two prolific seasons with Fiorentina, Toni also spent three seasons with German side Bayern Munich, where he helped the club to a domestic treble during the 2007–08 season, also reaching the UEFA Cup semi-finals; after falling out with the club's manager during his third season with the team, and being demoted to the reserve squad, he later returned to Italy on loan with Roma in 2010, and subsequently had spells with Genoa and Juventus. Read more on Wikipedia