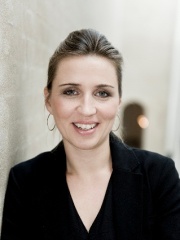 Mette Frederiksen (Danish: [ˈmetə ˈfʁeðˀʁeksn̩] (listen); born 19 November 1977) is a Danish politician who has been Prime Minister of Denmark since June 2019 and Leader of the Social Democrats since June 2015. The second woman to hold either office, she is also the youngest prime minister in Danish history.Besides a very brief career as a trade unionist (2000–2001), Frederiksen has never had any employment outside politics. She was first elected to the Folketing in the 2001 general election, representing Copenhagen County. Read more on Wikipedia

Among politicians, Mette Frederiksen ranks 8,258 out of 15,710. Before her are George I, Landgrave of Hesse-Darmstadt, Ernest, Margrave of Austria, Korbinian Brodmann, Thomas A. Hendricks, Aleksey Arakcheyev, and Sedjefakare. After her are Andrés Rodríguez, Nabonassar, Adolf Schmal, Lidia Gueiler Tejada, Indalecio Prieto, and Lucius Licinius Murena.