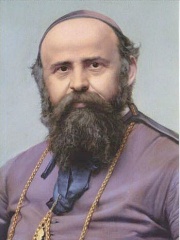 Daniele Comboni (15 March 1831 – 10 October 1881) was an Italian Roman Catholic bishop who served in the missions in Africa and was the founder of both the Comboni Missionaries of the Heart of Jesus and the Comboni Missionary Sisters. Comboni studied under Nicola Mazza in Verona where he became a multi-linguist and in 1849 vowed to join the missions in the African continent although this did not occur until 1857 when he travelled to Sudan. Read more on Wikipedia

Among religious figures, Daniele Comboni ranks 1,410 out of 2,238. Before him are Saint Meinhard, Gustav Trolle, Hōjō Ujimasa, John Berchmans, Aristarchus of Thessalonica, and François de la Chaise. After him are Joseph Genesius, Luigi De Magistris, Abercius of Hieropolis, Domenico Tardini, Stephen I of Constantinople, and Angelo Bagnasco.