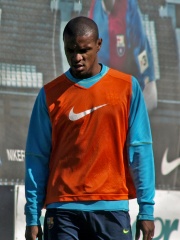 Eric Sylvain Abidal (French pronunciation: ​[eʁik abidal]; born 11 September 1979) is a French former professional footballer who played as a left back or centre back, and the director of football at FC Barcelona. In his career, he played mainly for Lyon and Barcelona, winning 18 titles with both teams combined, including two Champions League trophies with the latter. Read more on Wikipedia

Since 2007, the English Wikipedia page of Eric Abidal has received more than 305,370 page views. His biography is available in 58 different languages on Wikipedia making him the 479th most popular soccer player.