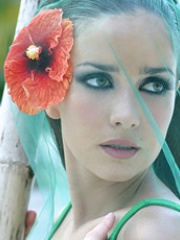 Natalia Marisa Oreiro Iglesias (Spanish pronunciation: [naˈtalja oˈɾejɾo]; born 19 May 1977) is a Uruguayan actress, singer, songwriter, producer, host and fashion designer. Oreiro began her career in telenovelas. Since 2008 she has switched to work primarily in films. Read more on Wikipedia

Among singers, Natalia Oreiro ranks 395 out of 3,541. Before her are Marian Gold, Adelina Patti, Marc Anthony, Arsen Dedić, Dino Merlin, and Anggun. After her are Janet Jackson, Sabah, Seal, Googoosh, Cecilia Bartoli, and Percy Sledge.

Among SINGERS In Uruguay

Among singers born in Uruguay, Natalia Oreiro ranks 1. After her are Jorge Drexler (1964).