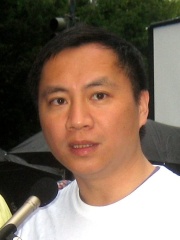 Wang Dan (born February 26, 1969) is a leader of the Chinese democracy movement and was one of the most visible student leaders in the Tiananmen Square protests of 1989. He holds a Ph.D. in history from Harvard University, and from August 2009 to February 2010, Wang taught cross-strait history at Taiwan's National Chengchi University, as a visiting scholar. He then taught at National Tsing Hua University until 2015.Besides conducting research on related topics, Wang is still active in promoting democracy and freedom for China. Read more on Wikipedia

Since 2007, the English Wikipedia page of Wang Dan has received more than 69,367 page views. His biography is available in 16 different languages on Wikipedia making him the 352nd most popular social activist.