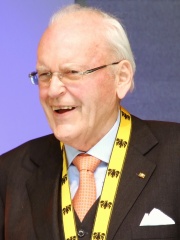 Roman Herzog (German: [ˈʁoːman ˈhɛʁt͡soːk] (listen); 5 April 1934 – 10 January 2017) was a German politician, judge and legal scholar, who served as the president of Germany from 1994 to 1999. A member of the Christian Democratic Union (CDU), he was the first president to be elected after the reunification of Germany. He previously served as a judge of the Federal Constitutional Court, and he was the President of the court 1987–1994. Read more on Wikipedia

Roman Herzog is a German politician and lawyer who served as the President of Germany from 1994 to 1999. He was a member of the Christian Democratic Union.

Among politicians, Roman Herzog ranks 2,240 out of 15,577. Before him are Sophie of France, Archduke Joseph, Palatine of Hungary, George Curzon, 1st Marquess Curzon of Kedleston, Aeschines, Shalmaneser I, and Rudolf von Laban. After him are Jehoram of Israel, George Villiers, 1st Duke of Buckingham, Ricimer, Ermanaric, Stefan Milutin, and Gannicus.