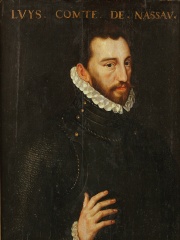 Louis of Nassau (Dutch: Lodewijk van Nassau, January 10, 1538 – April 14, 1574) was the third son of William I, Count of Nassau-Siegen and Juliana of Stolberg, and the younger brother of Prince William of Orange Nassau. Louis was a key figure in the revolt of the Netherlands against Spain and a strongly convinced Calvinist, unlike his brother William, whom he helped in various ways, including by arranging the marriage between him and his second wife Anna of Saxony. Read more on Wikipedia

Page views of Louis of Nassaus by language

Among politicians, Louis of Nassau ranks 7,436 out of 15,577. Before her are Cunimund, Dolon, Duke Louis of Württemberg, Princess Patricia of Connaught, Kuyucu Murad Pasha, and Grand Duchess Catherine Mikhailovna of Russia. After her are Eduard Kukan, Carlos Manuel de Céspedes, Rani Durgavati, Dragoș, Voivode of Moldavia, Salonia Matidia, and John II of Cyprus.