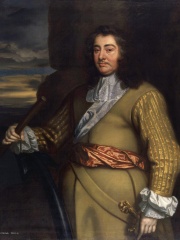 George Monck, 1st Duke of Albemarle JP KG PC (6 December 1608 - 3 January 1670) was a professional soldier from Devon, who fought on both sides during the Wars of the Three Kingdoms. A prominent military figure under the Commonwealth, his support was crucial to the Restoration of Charles II in 1660, who rewarded him with the title Duke of Albemarle and other senior positions. The younger son of an impoverished Devon landowner, Monck began his military career in 1625 and served in the Eighty Years' War until 1638, when he returned to England. Read more on Wikipedia

Among politicians, George Monck, 1st Duke of Albemarle ranks 7,837 out of 15,710. Before him are Tribhuwana Wijayatunggadewi, Rose Francine Rogombé, Fethi Okyar, Gnaeus Domitius Ahenobarbus, Zheng Keshuang, and Hubert Maga. After him are Princess Maria Pia of Bourbon-Parma, Thomas Bérard, María de Molina, Stephen the Posthumous, Ralph I, Count of Vermandois, and Štefan Tiso.