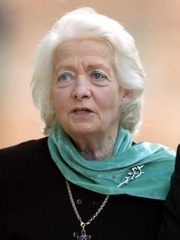 Frances Ruth Shand Kydd (previously Spencer, née Roche; 20 January 1936 – 3 June 2004) was the mother of Diana, Princess of Wales. She was the maternal grandmother of William, Prince of Wales and Prince Harry, Duke of Sussex, respectively first and fifth in the line of succession to the British throne. Read more on Wikipedia

Among noblemen, Frances Shand Kydd ranks 519 out of 842. Before her are Prince Georg Friedrich of Waldeck, Grand Duke Michael Mikhailovich of Russia, Guidobaldo II della Rovere, Duke of Urbino, Frederick August I, Duke of Oldenburg, Drahomíra, and Edward, Count of Savoy. After her are Louis I, Count of Blois, Théodolinde de Beauharnais, Christian I, Count Palatine of Birkenfeld-Bischweiler, Helena of Serbia, Queen of Hungary, Princess Maria Amalia of Saxony, and Princess Amalie of Saxe-Coburg and Gotha.