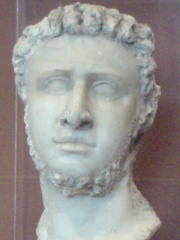 Ptolemy IX Soter II (Greek: Πτολεμαῖος Σωτήρ, Ptolemaĩos Sōtḗr "Ptolemy the Saviour"), commonly nicknamed Lathyros (Λάθυρος, Láthuros "chickpea"), was twice King of Ptolemaic Egypt. He was the son of Ptolemy VIII and Cleopatra III. He reigned as Ptolemy Philometor Soter in joint rule with his grandmother Cleopatra II and mother Cleopatra III from 116 to 107 BC, and then again as Ptolemy Soter from 88 to 81 BC. Ptolemy IX became the heir apparent after the murder of his half-brother Ptolemy Memphites in 130 BC, during a civil war between Ptolemy VIII and Cleopatra II. On his father's death in 116 BC, he became co-regent with Cleopatra II (until 115 BC) and with Cleopatra III. He eventually quarrelled with his mother and in 107 BC, she deposed him and replaced him with his younger brother, Ptolemy X. However, Ptolemy IX succeeded in seizing control of Cyprus. From there he invaded Judaea, but was prevented by Ptolemy X from invading Egypt (103–102 BC). Read more on Wikipedia

Ptolemy IX Lathyros was most famous for being the last pharaoh of ancient Egypt. He was the son of Ptolemy VIII and Cleopatra III.

Among politicians, Ptolemy IX Lathyros ranks 1,644 out of 15,577. Before him are Uzziah, Olybrius, Celâl Bayar, Libius Severus, Crazy Horse, and Pharamond. After him are Empress Lü, Axel Oxenstierna, Josef Kramer, Šuppiluliuma I, Shinzō Abe, and Soong Mei-ling.

Others Deceased in 80 BC