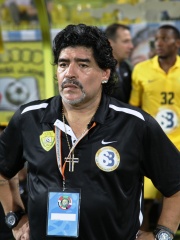 Diego Armando Maradona (Spanish: [ˈdjeɣo maɾaˈðona]; 30 October 1960 – 25 November 2020) was an Argentine professional football player and manager. Widely regarded as one of the greatest players in the history of the sport, he was one of the two joint winners of the FIFA Player of the 20th Century award. Maradona's vision, passing, ball control, and dribbling skills were combined with his small stature, which gave him a low centre of gravity allowing him to manoeuvre better than most other players. Read more on Wikipedia

Diego Maradona is most famous for his goal against England in the 1986 World Cup.

Among soccer players, Diego Maradona ranks 4 out of 16,880. Before him are Pelé, Johan Cruyff, and Ferenc Puskás. After him are Lev Yashin, Gerd Müller, Franz Beckenbauer, Eusébio, Garrincha, Alfredo Di Stéfano, Zinedine Zidane, and Giuseppe Meazza.