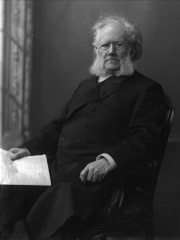 Henrik Johan Ibsen (; Norwegian: [ˈhɛ̀nrɪk ˈɪ̀psn̩]; 20 March 1828 – 23 May 1906) was a Norwegian playwright and theatre director. As one of the founders of modernism in theatre, Ibsen is often referred to as "the father of realism" and one of the most influential playwrights of his time. His major works include Brand, Peer Gynt, An Enemy of the People, Emperor and Galilean, A Doll's House, Hedda Gabler, Ghosts, The Wild Duck, When We Dead Awaken, Rosmersholm, and The Master Builder. Read more on Wikipedia

Since 2007, the English Wikipedia page of Henrik Ibsen has received more than 1,870,345 page views. His biography is available in 103 different languages on Wikipedia making him the 38th most popular writer.