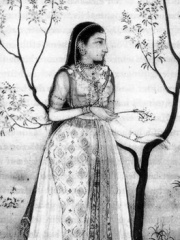 Jahanara Begum (Persian: جہان آرا بیگم‎; 23 March 1614 – 16 September 1681) was a Mughal princess and the Padshah Begum of the Mughal Empire between 1631 to 1681. She was the eldest child of Emperor Shah Jahan and his wife, Mumtaz Mahal. Read more on Wikipedia

Since 2007, the English Wikipedia page of Jahanara Begum has received more than 559,689 page views. Her biography is available in 23 different languages on Wikipedia making her the 10,496th most popular politician.

Among politicians, Jahanara Begum ranks 10,440 out of 14,801. Before her are Andres Tarand, Yusuf Lule, Manius Aquillius, John Hay, Abeid Karume, and Alexander Rueb. After her are Boris Pankin, Eudamidas I, João do Canto e Castro, Pakalitha Mosisili, Petre P. Carp, and Ana Brnabić.