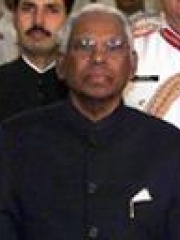 Kocheril Raman Narayanan listen (27 October 1920 – 9 November 2005) was an Indian statesman, diplomat, academician and politician who served as the tenth president of India (1997–2002) and ninth vice president of India (1992–1997). Born in Perumthanam, Uzhavoor village, in the princely state of Travancore (present day Kottayam district, Kerala), and after a brief stint with journalism and then studying political science at the London School of Economics with the assistance of a scholarship, Narayanan began his career in India as a member of the Indian Foreign Service in the Nehru administration. He served as ambassador to Japan, United Kingdom, Thailand, Turkey, China and United States and was referred to by Nehru as "the best diplomat of the country". Read more on Wikipedia

Among politicians, Kocheril R. Narayanan ranks 8,282 out of 15,710. Before him are Sevar of Bulgaria, Fabia Eudokia, Herman II, Duke of Swabia, Anerood Jugnauth, Duke Louis of Württemberg, and Emilio Colombo. After him are Joachim Ernest, Prince of Anhalt, Princess Anne, Duchess of Calabria, Władysław Czartoryski, Issa Hayatou, James Michel, and Luigi Longo.