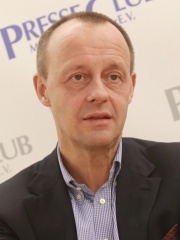 Friedrich Merz (born 11 November 1955) is a German lawyer and politician. A member of the Christian Democratic Union (CDU), he served as a Member of the European Parliament (MEP) from 1989 to 1994 and was elected to the Bundestag from 1994 until 2009, where he chaired the CDU/CSU parliamentary group from 2000 to 2002. Merz was a candidate in the 2018 CDU leadership election, placing second; he is running again in the 2020 leadership election.Merz joined the CDU's youth wing in 1972 and is reputed to be a member of the Andean Pact, a powerful network formed by members of the CDU youth wing in 1979 during a trip to the Andes. Read more on Wikipedia

Since 2007, the English Wikipedia page of Friedrich Merz has received more than 195,946 page views. His biography is available in 19 different languages on Wikipedia making him the 12,475th most popular politician.