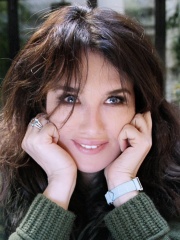 Isabelle Yasmina Adjani LdH (Arabic: إيزابيل ياسمين عجاني; born 27 June 1955) is a French actress and singer of Algerian and German descent. She is the only person in history to win five César Awards; she won the Best Actress award for Possession (1981), One Deadly Summer (1983), Camille Claudel (1988), La Reine Margot (1994) and Skirt Day (2009). She was made a Chevalier of the Legion of Honour in 2010 and a Commander of the Order of Arts and Letters in 2014. Her performance as Adèle Hugo in the 1975 film The Story of Adèle H. Read more on Wikipedia

Isabelle Adjani is a French actress and singer. She is most famous for her role in the movie "Possession" and her performance in the play "Medea."