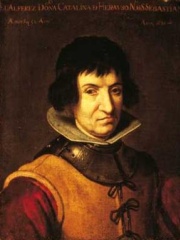 Catalina de Erauso (in Spanish; or Katalina Erauso in Basque) (San Sebastián, Spain, 1585 or 1592 — Cuetlaxtla near Orizaba, New Spain, 1650), who went by Alonso Díaz, Antonio de Erauso, and some other masculine names and is also known in Spanish as La Monja Alférez (English, The Ensign Nun), was a one-time nun who subsequently travelled around Spain and Spanish America, mostly under male identities, in the first half of the 17th century. Read more on Wikipedia

Among politicians, Catalina de Erauso ranks 5,878 out of 15,710. Before her are José Antonio Páez, Grand Duke Peter Nikolaevich of Russia, Princess Wilhelmine Ernestine of Denmark, Al-Mughira, Ammuna, and Rechiar. After her are At-Ta'i, Qara Osman, Gerberga of Saxony, Tahir ibn Husayn, Prince Charles of Hesse and by Rhine, and Emperor Taizong of Jin.