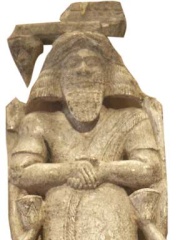 Hazael (; Hebrew: חֲזָהאֵל, Modern: Ḥaza'ēl, Tiberian: H̱azā'ēl; Aramaic: חזאל, from the triliteral Semitic root h-z-y, "to see"; his full name meaning, "El/God has seen"; Akkadian: 𒄩𒍝𒀪𒀭, romanized: Ḫa-za-’-ilu) was an Aramean king who is mentioned in the Bible. Under his reign, Aram-Damascus became an empire that ruled over large parts of Syria and the Land of Israel. Read more on Wikipedia

Since 2007, the English Wikipedia page of Hazael has received more than 126,448 page views. His biography is available in 20 different languages on Wikipedia making him the 4,767th most popular politician.

Page views of Hazaels by language

Among politicians, Hazael ranks 4,739 out of 14,801. Before him are Nicholas Kanabos, Moussa Traoré, Robert Clive, Miran Shah, Princess Victoria of the United Kingdom, and Antonia the Elder. After him are Yamato Takeru, Igor Smirnov, Ahmed Izzet Pasha, Maria of Montpellier, Horace Walpole, and Countess Palatine Caroline of Zweibrücken.

Among people born in 900 BC, Hazael ranks 15. Before him are Jehoash of Israel, Jehoahaz of Israel, Caranus of Macedon, Menua, Arame of Urartu, and Shammuramat. After him are Takelot II, Sarduri I, Shoshenq III, Ishpuini of Urartu, Ashur-dan III, and Shalmaneser IV. Among people deceased in 900 BC, Hazael ranks 4. Before him are Elijah, Uzziah, and Omri. After him are Tukulti-Ninurta II and King Gong of Zhou.