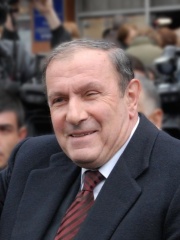 Levon Hakobi Ter-Petrosyan (Armenian: Լևոն Հակոբի Տեր-Պետրոսյան; born 9 January 1945), also known by his initials LTP, is an Armenian politician who served as the first President of Armenia from 1991 to 1998. A senior researcher at the Matenadaran Institute of Ancient Manuscripts, he led the Karabakh movement for the unification of the Armenian-populated Nagorno-Karabakh with Armenia in 1988. After Armenia's independence from the Soviet Union in 1991, Ter-Petrosyan was elected president in October 1991 with overwhelming public support. Read more on Wikipedia

Levon Ter-Petrosyan was the president of Armenia from 1991 to 1998. He is most famous for his work to end the Nagorno-Karabakh War and the Armenian-Azerbaijani conflict in the early 1990s.