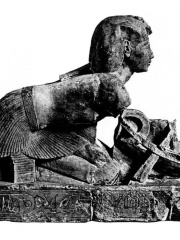 Usermaatre Setepenamun Osorkon III Si-Ese was Pharaoh of Egypt in the 8th Century BC. He is the same person as the Crown Prince and High Priest of Amun Osorkon B, son of Takelot II by his Great Royal Wife Karomama II. Prince Osorkon B is best attested by his Chronicle—which consists of a series of texts documenting his activities at Thebes—on the Bubastite Portal at Karnak. He later reigned as king Osorkon III in Upper Egypt for twenty-eight years after defeating the rival forces of Pedubast I/Shoshenq VI who had apparently resisted the authority of his father here. Osorkon ruled the last five years of his reign in coregency with his son, Takelot III, according to Karnak Nile Level Text No. Read more on Wikipedia

Among politicians, Osorkon III ranks 8,108 out of 15,577. Before him are Mucianus, Princess Anna of Saxony, Michael II Komnenos Doukas, Floris IV, Count of Holland, Prince Ernst August of Hanover, and Thoros of Edessa. After him are Wo Jia, Abdalonymus, Mir Osman Ali Khan, Otto, Duke of Burgundy, Princess Françoise of Orléans, and Mstislav Mstislavich.

Others Deceased in 758 BC