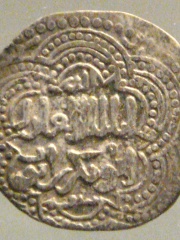 Al-Adil I (Arabic: العادل, in full al-Malik al-Adil Sayf ad-Din Abu-Bakr Ahmed ibn Najm ad-Din Ayyub, Arabic: الملك العادل سيف الدين أبو بكر بن أيوب,‎ "Ahmed, son of Najm ad-Din Ayyub, father of Bakr, the Just King, Sword of the Faith"; 1145 – 31 August 1218) was the fourth Sultan of Egypt and Syria, and brother of Saladin, who founded both the Sultanate of Egypt, and the Ayyubid dynasty. he was known to the Crusaders as Saphadin (derived from his laqab or honorific title Sayf ad-Din, meaning "Sword of Faith"), a name by which he is still known in the Western world. A gifted and effective administrator and organizer, Al-Adil provided crucial military and civilian support for the great campaigns of Saladin (an early example of a great minister of war). Read more on Wikipedia

Page views of Al-Adil IS by language

Among politicians, Al-Adil I ranks 3,600 out of 15,577. Before him are Theresa Kunegunda Sobieska, Tarpeia, Francisco de Almeida, Sajida Talfah, Prince George, Duke of Kent, and André-Hercule de Fleury. After him are Archduchess Maria Anna of Austria, Princess Henriette Adelaide of Savoy, Raymond VII, Count of Toulouse, João Bernardo Vieira, Milonia Caesonia, and Berenice I of Egypt.

Among people born in 1145, Al-Adil I ranks 5. Before him are Attar of Nishapur, Marie of France, Countess of Champagne, Ibn Jubayr, and Sverre of Norway. After him are Maria of Antioch, Mikhail of Vladimir, Shihab al-Din 'Umar al-Suhrawardi, Margaret I, Countess of Flanders, Baha ad-Din ibn Shaddad, Sven Aggesen, and Theodora Komnene, Queen of Jerusalem. Among people deceased in 1218, Al-Adil I ranks 5. Before him are Otto IV, Holy Roman Emperor, Jayavarman VII, Kuchlug, and Simon de Montfort, 5th Earl of Leicester. After him are Odo III, Duke of Burgundy, Berthold V, Duke of Zähringen, Robert II, Count of Dreux, Theresa of Portugal, Countess of Flanders, Konstantin of Rostov, Hugh I of Cyprus, and Theobald VI, Count of Blois.