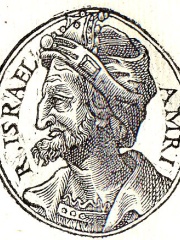 Omri (Hebrew: עָמְרִי‎‎, ‘Omrī; Akkadian: 𒄷𒌝𒊑𒄿 Ḫûmrî [ḫu-um-ri-i]; fl. 9th century BC) was, according to the Hebrew Bible, the sixth king of Israel. He was a successful military campaigner who extended the northern kingdom of Israel. Read more on Wikipedia

Omri is most famous for being the first king of Israel. He reigned for 12 years, and his son Ahab succeeded him.

Page views of Omris by language

Among politicians, Omri ranks 3,010 out of 15,710. Before him are Pekah, Adélaïde of France, Joko Widodo, Francis, Count of Vendôme, Winnie Madikizela-Mandela, and Nectanebo II. After him are Carin Göring, William Pitt the Younger, Hystaspes, Cleopatra Eurydice of Macedon, Wolfgang Schäuble, and Prince Valdemar of Denmark.

Among people born in 1000 BC, Omri ranks 14. Before him are Baasha of Israel, King Elah, Ashurnasirpal II, Nadab of Israel, Michal, and Zimri. After him are Hiram I, Menelik I, Adad-nirari II, Osorkon II, Shoshenq II, and Osorkon I. Among people deceased in 900 BC, Omri ranks 3. Before him are Elijah and Uzziah. After him are Hazael, Tukulti-Ninurta II, King Gong of Zhou, Hadadezer, and Ben-Hadad I.