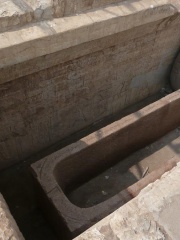 King Usermaatre Setepenre Shoshenq III of the 22nd Dynasty ruled for 39 years according to contemporary historical records. Two Apis Bulls were buried in the fourth and 28th years of his reign and he celebrated his Heb Sed Jubilee in his regnal year 30. He was not a son of Osorkon II but instead a grandson through his dead father prince Takelot. Read more on Wikipedia

Since 2007, the English Wikipedia page of Shoshenq III has received more than 100,884 page views. His biography is available in 21 different languages on Wikipedia. Shoshenq III is the 6,272nd most popular politician (down from 5,490th in 2019).

Among politicians, Shoshenq III ranks 6,272 out of 15,710. Before him are Emperor Daozong of Liao, Bernhardus Varenius, Wiman of Gojoseon, Sisavath Keobounphanh, Alben W. Barkley, and Hong Tianguifu. After him are Yuriko Koike, Matvei Zakharov, Alluwamna, Louis François Joseph, Prince of Conti, Paolo Boi, and Princess Hildegard of Bavaria.

Others Deceased in 798 BC