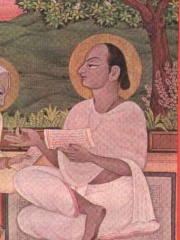 Vallabhacharya (1479–1531 CE), also known as Vallabha, was an Indian philosopher who founded the Krishna-centered PushtiMarg sect of Vaishnavism in the Braj region of India, and the philosophy of Shuddha advaita (Pure Nondualism).Vallabha was born in a Telugu Tailang Brahmin family that had been living in Varanasi, who escaped to Champaran of Chhattisgarh state while expecting Vallabha, expecting a Muslim invasion, which ultimately didn't happen, during the late 15th century.Vallabha studied the Vedas and the Upanishads as a child, then travelled throughout the Indian subcontinent over 20 years. He became one of the important leaders of the devotional Bhakti movement. Vallabhacharya's mother was Illamma who was the daughter of a family priest serving the rulers of the empire of Vijayanagara. Read more on Wikipedia

Page views of Vallabhas by language

Among philosophers, Vallabha ranks 845 out of 1,089. Before him are Arethas of Caesarea, Sarada Devi, Dietrich von Hildebrand, Pierre Nicole, Philipp Mainländer, and Matthias Bel. After him are Emer de Vattel, Hemachandra, Arai Hakuseki, Kumārila Bhaṭṭa, Carl Dahlhaus, and George of Trebizond.