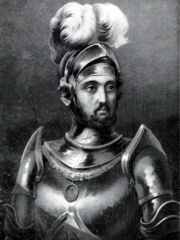 Diego Columbus (Portuguese: Diogo Colombo; Spanish: Diego Colón; Italian: Diego Colombo; 1479/1480 – February 23, 1526) was a navigator and explorer under the Kings of Castile and Aragón. He served as the 2nd Admiral of the Indies, 2nd Viceroy of the Indies and 4th Governor of the Indies as a vassal to the Kings of Castile and Aragón. He was the eldest son of Christopher Columbus and his wife Filipa Moniz Perestrelo.He was born in Portugal, either in Porto Santo in 1479/1480, or in Lisbon in 1474. Read more on Wikipedia

Among people born in 1479, Diego Columbus ranks 6. Before him are Joanna of Castile, Hafsa Sultan, Lisa del Giocondo, Vasili III of Russia, and Giuliano de' Medici, Duke of Nemours. After him are Peter Henlein, Guru Amar Das, Francisco de Montejo, Ippolito d'Este, Vallabha, and Catherine of York. Among people deceased in 1527, Diego Columbus ranks 3. Before him are Niccolò Machiavelli and Charles III, Duke of Bourbon. After him are Juan de Grijalva, Charles de Lannoy, 1st Prince of Sulmona, Casimir, Margrave of Brandenburg-Kulmbach, Christoph I, Margrave of Baden-Baden, Johann Froben, Rodrigo de Bastidas, Felix Manz, and Catherine of York.