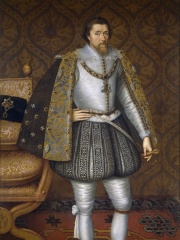 James VI and I

James VI and I (James Charles Stuart; 19 June 1566 – 27 March 1625) was King of Scotland as James VI from 24 July 1567 and King of England and Ireland as James I from the union of the Scottish and English crowns on 24 March 1603 until his death in 1625. The kingdoms of Scotland and England were individual sovereign states, with their own parliaments, judiciaries, and laws, though both were ruled by James in personal union. James was the son of Mary, Queen of Scots, and a great-great-grandson of Henry VII, King of England and Lord of Ireland, and thus a potential successor to all three thrones. Read more on Wikipedia

James VI and I is most famous for being the first monarch of the United Kingdom of Great Britain. He was the son of Mary, Queen of Scots, and succeeded her when she was forced to abdicate in 1567.

Page views of James VI and IS by language

Among politicians, James VI and I ranks 213 out of 15,710. Before him are Akbar, Charles X of France, Napoleon II, Emperor Meiji, William the Silent, and Empress Dowager Cixi. After him are Scipio Africanus, Thutmose III, Salvador Allende, Antoninus Pius, Recep Tayyip Erdoğan, and Hulagu Khan.