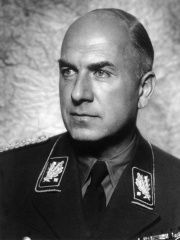 Fritz Todt (4 September 1891 – 8 February 1942), was a German construction engineer and senior Nazi, who rose from the position of "Inspector General for German Roadways", where he directed the construction of the German Autobahns (Reichsautobahnen), to become the Reich Minister for Armaments and Ammunition. From that position he directed the entire German wartime military economy. At the beginning of World War II he initiated what Hitler named Organisation Todt, a military-engineering company, which supplied industry with forced labor and administered construction of the Nazi concentration camps in the late phase of Nazi Germany. Read more on Wikipedia

Since 2007, the English Wikipedia page of Fritz Todt has received more than 281,779 page views. His biography is available in 40 different languages on Wikipedia making him the 16th most popular engineer.

Most Popular ENGINEERS in Wikipedia